Prismaflex International firmly establishes its expertise on the African continent with a pioneering large format LED display: a 300m² LED screen posted 10m above the ground in Lagos City.

Already extremely active on the African continent, Prismaflex International has developed an outstanding reputation there for its large and very large trivisions, its scrolling signs and street furniture.

And to keep the momentum going, the Rhone-Alpes based company recently mounted one of Nigeria’s largest ever LED signs.

Prismaflex has been operating out of its South African subsidiary for over 15 years now and works closely with advertising professionals of the OOH and POP markets. The company was actively present at the MARKEX event in Johannesburg in June 2014 to present its latest innovative product and print solutions for stores and POS outlets.

Late 2014, Prismaflex International made a real statement of its know-how in a new African nation by installing one of Nigeria’s largest ever LED displays for GEMS Outdoor. The sign is located alongside the Lagos-Ibadan highway next to Lagos, the continent’s biggest city. It is a P20 LED display 10 metres tall by 30 metres wide and proudly stands 10 metres above the ground. 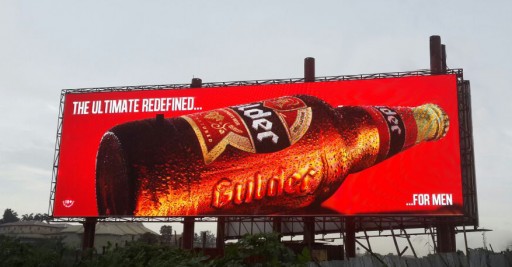